When the idea of Miami pops up around the world, the images that come to mind are spectacular beaches, a shimmering skyline set against Biscayne Bay, art deco, and over-the-top luxury. These images help to tell the story of Miami, but it is far from complete.

Purvis Young’s life was an example of the “other” side of Miami. Far removed from the glitz and tourist hotspots, Young was a man of the streets. He lived during a period of unprecedented change in American history. Born into the Jim Crow south, Young lived to see many changes during his 67 years. He witnessed the growth and destruction of his neighborhood through gentrification, riots, AIDS, drugs and other challenges. He found himself homeless at a few junctures in his life, but he found his voice through art.

A self-taught artist who used collage techniques, found objects and paint to depict his life and what he saw in his Overtown community. Today, his work is celebrated as a rare and honest glimpse into urban street life and the times in which he lived.

“Purvis’ work speaks to the community that we serve as social workers,” said Boren. “I discovered his art when I was working with the indigent and homeless populations in Miami and really appreciated how it represented that point of view, one that many try to turn a blind eye to but that Purvis understood and celebrated.” 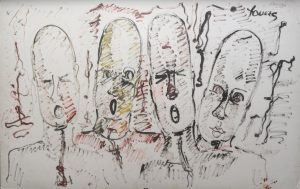 In addition to the social work, Purvis’ work speaks to other disciplines at the college such as public health, nutrition and community research collaborations that serve the vulnerable living with health challenges.

Born in Liberty City in 1943, Young was incarcerated in his youth and, when he emerged from prison, turned to art without any formal education to describe the world around him.

“He lived in Overtown, which was known for its music scene and was a thriving African American community before the highway was built,” continued Boren. “He painted the world around him as it existed in a time when the African American experience was undergoing a lot of change in the South, and he documented what he saw around him: violence, racism and hope.”

A once-thriving community and the epicenter of African American society in Miami, Overtown was devastated by the construction of I-95 in the 1960s, leaving the lively area destitute as business moved elsewhere and much of the resident population moved.

In the 2006 documentary “Purvis of Overtown,” Young was quoted saying, “My eyes are like a camera, a picture camera, and it takes a slow motion of life. I don’t want to go that fast, where I can’t see life face-to-face.”

Young painted relentlessly from the 1960s until his death in 2010 of cardiac arrest and pulmonary edema. A result of many years of bad health, which can be attributed to the social determinants of health that afflict his community such limited access to healthy foods, unsafe neighborhoods and poorer educational standards, Young suffered from diabetes and had received a kidney transplant just 3 years before his passing.

“We are very grateful to Shed and Jose for their generous donation to the School of Social Work,” said Mary Helen Hayden, director of the School of Social Work. “My hope is that by lining our hallways with Young’s work, we can inspire students to keep on fighting for social justice and change. Young’s work stands as an inspiration to all and I invite to community to come and see it.”

“Looking at the works of Purvis Young takes us into a world that is at once familiar – think of the homeless and neglected we see on the streets daily – and beyond our comprehension. Through his eyes, we see the poorest conditions, vacant lots and the detritus of society, transformed into works of art,” Carol Damian, art historian. “He introduces a cast of characters that includes his ever-present apocalyptic horseman and masked acquaintances surrounded by an environment we see in the simplest of terms, through lines and colors and discarded materials, and little else, but they feed our imagination as great art has throughout the centuries. It is the personal vision of an extraordinary man surviving an extraordinary life.” ♦

Artwork shown at top of page: Untitled (circa 1994-’96), acrylic on board
Artist Purvis Young often referred to these figures, shown playing instruments, as “bluesmen” or “jazzmen” in homage to the early music scene in Miami’s Overtown neighborhood.