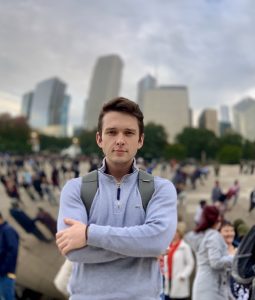 Doctoral student Alexander Rodichkin recently won a top honor in a graduate-level competition organized by the Metals Specialty Section at the virtual annual meeting of the Society of Toxicology. His poster presentation took second place in the Metals Specialty Section among students from the United States and abroad. The entry describes his three-year study on the pathophysiology of toxic brain manganese concentrations in a mouse model of childhood dystonia-parkinsonism that occurs in humans as a result of a genetic mutation. His work examined the behavioral, neurochemical and neuropathological consequence of toxic brain manganese concentrations resulting from the global deletion of the manganese transporter gene SLC39A14. He showed that this animal model expresses many of the neurological characteristics of the human disease.

The award validates a shift in career plans that began when Rodichkin, who in 2018 earned a bachelor’s in biology from FIU, met Tomás R. Guilarte, dean of the Robert Stempel College of Public Health & Social Work, professor in the department of Environmental Health Sciences and director of the Brain, Behavior & Environment Emerging Preeminent Program at FIU. Unsure about following through with the medical degree he had once considered, Rodichkin was at the time thinking to go into cancer research when an advisor suggested he meet with Dr. Guilarte.

After a brief interview, the seasoned neuroscientist and neurotoxicologist introduced Alex to the other faculty and students who work in the program. Rodichkin, still undecided, chose to spend the next three months observing experiments that explore the effect of environmental pollutants on neurological and mental health.

“The projects themselves are interesting,” Rodichkin says of investigations that examine, for example, the effect of early life lead exposure on cognitive function or the development and validation of molecular biomarkers of brain injury and inflammation. And he adds, “From a more human perspective, I’d say the lab is more like a family.”

That sense of camaraderie comes out of daily interaction with his mentor Dr. Guilarte as well as the other members of the lab and program, who meet to offer one another helpful critiques during practice sessions in advance of conference presentations and share meals together when not in pandemic mode.

Originally from Russia, Rodichkin emigrated to the United States about ten years ago. The work that he conducts today in the Guilarte lab will be used to secure funding from the National Institutes of Health—a proposal is in the works—and might seem remarkable for someone so recently at a crossroads. But Rodichkin is not like everyone else.

“He’s really amazing and doing very important work,” Guilarte says. “In my career in academia, he’s in the top three best of all my students, if not the best.”

As an example of his protégé’s drive, Guilarte speaks of the “very complicated and intricate experiments” that Rodichkin has tackled with passion and immediacy. “He would start at 7 o’clock at night and end at 4 or 5 in the morning. He will get the instrumentation manual and in no time learn how to run a piece of equipment. I didn’t tell him that he needed to do that. He did it on his own.”