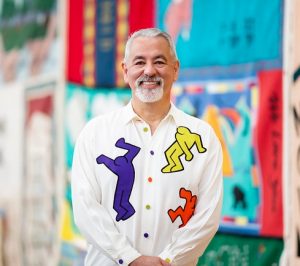 Shed Boren has undertaken a labor of herculean proportions to fill in the gaps for young people who have little knowledge of the AIDS epidemic.

“I just realized people don’t know this,” Boren says of those on FIU’s campus who inspired a new exhibition, now open at the Coral Gables Museum. “I meet some LGBTQ college students who don’t have any clue that [society] wasn’t always as accepting and HIV isn’t [as easy as] just take a pill and prevent it.”

So he set out to tell an impactful story of the once-mysterious illness that first came to attention in the early 1980s and began cutting down seemingly healthy people in their prime. Perhaps most shockingly—or not, given the era—victims’ predominantly homosexual orientation provoked widespread judgment and outright hate at a time when few gays lived openly.

Boren has collected hundreds of artifacts to illustrate the narrative of AIDS in the United States and South Florida: scientific articles by retired Stempel Professor William Darrow, who served as a leader and researcher with the CDC during the early days of the epidemic and who features in a best-selling book and subsequent major motion picture about that time; 66 AIDS-awareness posters from the Wolfsonian-FIU collection that present the diverse perspectives and complex messages around the global health crisis; photographs of the annual White Party that began in 1985 at Miami’s Vizcaya Museum and Gardens as a fundraiser for AIDS care; and so much more.

Equally important, he has assembled portions of the National AIDS Memorial quilt and the personal effects of those lost too young. “It humanizes them,” Boren says of the things that speak to poignant moments and unique passions to bring individuals into relief: an intricate lace blouse worn on a wedding day, a youth baseball jersey emblazoned with “Cubanitos” worn by a boy in Havana.

Also on view: the works of local artists, among them Carlos Alfonzo, Fernando Garcia, Carlos Macia, Adolfo Sanchez and Sheldon Lurie, all gone by the early 1990s, as well as key projects that show the efforts of the South Florida art community to aid those affected by the disease.

For Boren, the endeavor was personal. “I spent 11 years working at Mercy Hospital in charge of AIDS care,” he says. “I really had a chance to see everything from, you find out you’re HIV positive to you pass away, that whole gamut and spectrum of the disease. So it clearly made a huge impact on my life and the way that I see the world.”

Sharing his background with social work students on the first day of class three years ago, he had one express particular interest in learning more about the earliest days of the epidemic. It was from conversations with that student —whose own late parents contracted the illness, one through a blood transfusion—that Boren’s idea for the exhibition first grew.